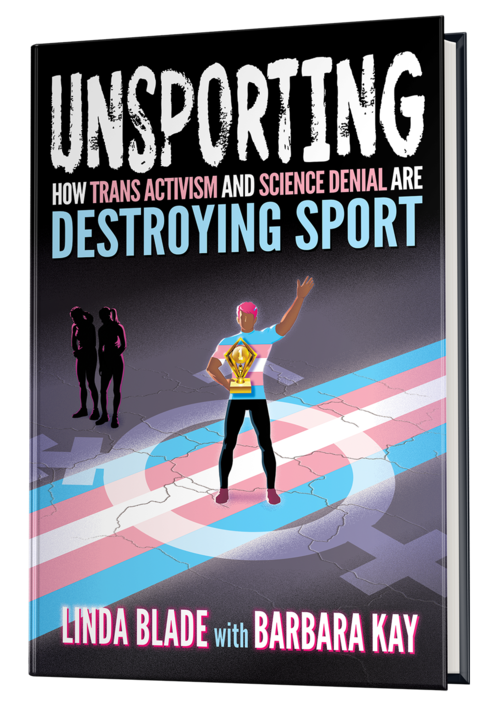 How Trans Activism and Science Denial are Destroying Sport

Radical gender activists are using a pseudoscientific theory of human biology to hijack sports and subvert the long-established concept of fair play — forcing women and girls to risk their safety, pushing them aside for male athletes using the excuse of “inclusivity.”

In the new book, Unsporting: How Trans Activism and Science Denial are Destroying Sport, former Canadian track champion Linda Blade and renowned National Post columnist Barbara Kay, examine the dangers of gender ideology in sports. They document the attack on biological facts upon which the level playing field of sports rests.

Tackling issues few have the courage to say out loud, Unsporting shows the harm inflicted on female athletes and identifies the institutions driving this movement.

What does the future hold for sports if biological reality is ignored? Blade answers that question and concludes with a reasonable plan to reverse course.

A former Canadian track and field champion and NCAA All American, Linda Blade has spent 25 years as a sport-performance professional coach in Edmonton in over 15 sports. Linda has worked with NHL players, Olympics athletes and Athletics Canada’s Run-Jump-Throw program.

Linda has a PhD in Kinesiology, and she's travelled the globe conducting coach education courses on behalf of World Athletics, including a groundbreaking course for female coaches in Iran in 1995.

In 2014, she was elected as president of the board for Athletics Alberta, where she works diligently to review and contribute to Canadian sport policy.

Barbara Kay has been a columnist for the National Post since 2003. She also writes regularly for The Post Millennial and The Epoch Times. She is the author of three books.

Barbara has five granddaughters. One of them, a serious 15-year-old hockey player with high aspirations, was always in her thoughts throughout this book’s evolution.

Sign up to receive emails and updates from Rebel News